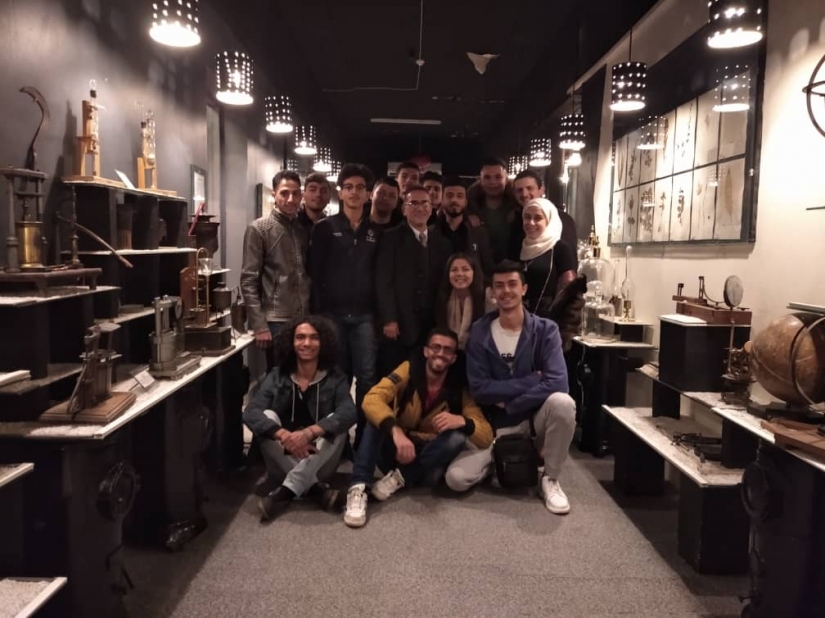 The Faculty of Petroleum Engineering at the Syrian Private University launched its activities for the academic year 2020/2021 on Thursday the 12th of July, 2020 with a scientific visit for students of the General Geology course to the Damascus Educational Museum under the supervision of Eng. Youssef Radwan, member of the teaching staff at the faculty.

The museum director received the participating students and gave a presentation on the history of the museum’s establishment, its components, and its educational importance. After that, the participants toured the halls of the museum, where the first hall included many mummified parts of animals that were hunted by the Syrian traveler Hussein Ibish in different regions of Africa and India, documented with pictures and explanations. Other halls included tools and contents that were used to conduct practical experiments in the laboratories of physics, chemistry and natural sciences at Damascus high schools. The remaining halls contained tools, equipment, devices, and other very diverse components that were used in various daily life activities in the Syrian society.

As for the hall that was the main purpose of this visit, it included a group of minerals, rocks and fossils from different geological eras collected from all parts of Syria by a number of doctors of the geology department at Damascus University, the Syrian Private University, and various Syrian scientific and production institutions in Syria that were presented to the museum. The supervisor of the visit Eng. Youssef Radwan made explanations about the hall's components and answered the students' questions and inquiries.

At the end of the visit, the students expressed to the director of the museum their positive impression and the added scientific value that they gained from this visit. They also thanked him for the efforts made by the museum staff in preparing and developing it continuously.

The Syrian Private University thanks the management of the Damascus Educational Museum for its reception of university students and wishes them success in their mission in spreading museum culture and deepening its educational importance for the promising generations of Syria.