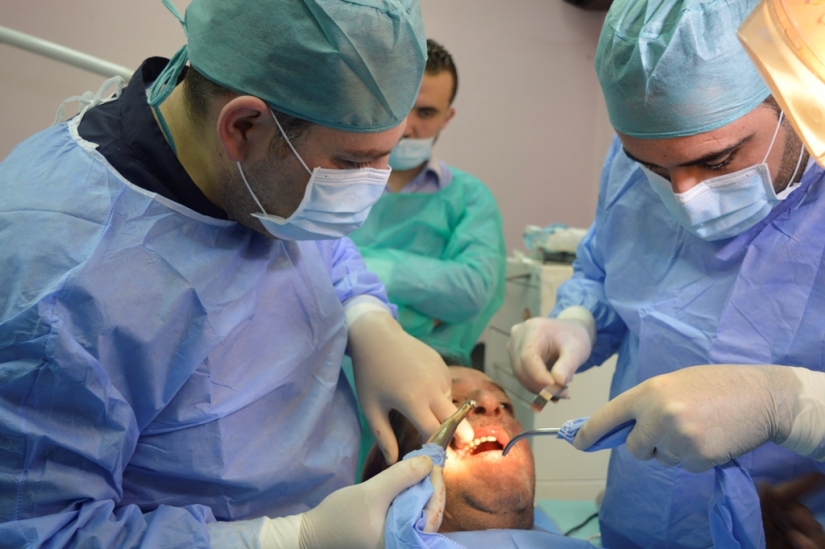 Laboratory training was conducted in the laboratories of the Faculty of Dentistry where the participants were divided into 7 groups. Each participant developed a laboratory implant on an artificial jaw, listened to an explanation of how to work, and saw a demonstration by a doctor, camera and projector to the screen. See the details of the work.

This course allowed participants to have a patient with only the cost of the implant with a 10% discount provided by the sponsor of the course to assist in the surgical operation, and later participate in the compensatory work. The transplant operations took place during the fifth and sixth day of the course in the clinics of the Faculty of Dentistry. A large number of participants follow the transplant by transferring the surgical procedure through a video camera to a large screen that allows the follow up with a surgeon to explain to the viewers what is displayed on the screen.

The course was sponsored by Cedra Syria and Bayosir, and was covered by the Syrian satellite channel, Taleqee TV, Tishreen, the Syrian Dental Association and e-Syria. The TV channel in its studios met Dr. Mazen Zenithi (course supervisor) talked about this training course and its features and the activities of the Syrian Private University.

What is unique about this course is that it is a free course that showed the interest of the Syrian University for its students and its keenness to enhance their skills and practical and theoretical knowledge. It also underlines the important role played by the Faculty of Dentistry at the Syrian Private University in serving the community both in terms of free medical care in dental clinics or from Where the partnership with other private and public universities to prepare outstanding scientific cadres capable of performing their role professionally, especially that this course and others are not only directed to the students of the Syrian Private University, but allow the students of dentistry from other universities to attend and The birth of which will reflect positively on the educational outcomes in our beloved Syria.

The course was supervised by Dr. Mazen Zenati, Head of Oral and Maxillofacial Surgery at our College. His work was characterized by careful follow-up, good organization and attention to detail that contributed to the success of this course and the achievement of the desired objective