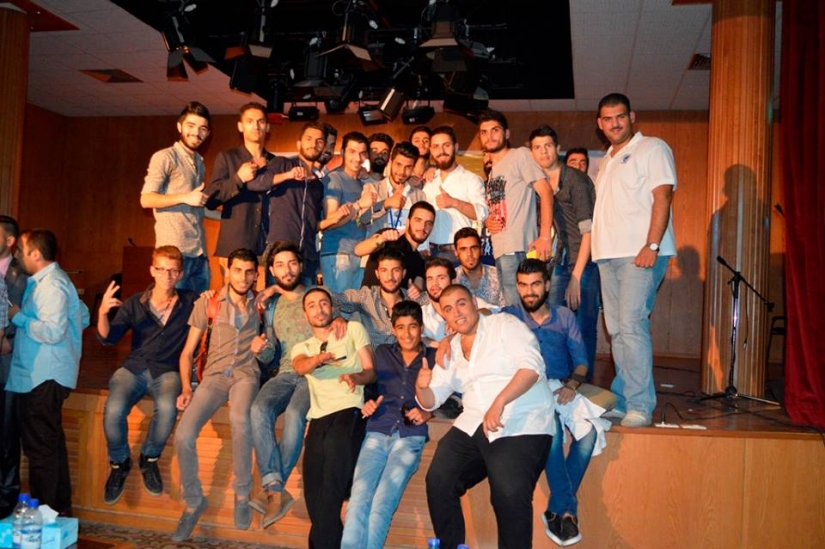 The Syrian Private University, in cooperation with the National Union of Syrian Students, held the final stage of the student talent competition "Spu Best Talent2" on Monday 25/4/2016 at the headquarters of the temporary university (Martyr Bassel Al Assad Institute).

The ceremony was attended by Prof. Dr. Abdul Razzaq Sheikh Issa, Vice President for Administration and Students Affairs, Dr. Marwan El-Hajji, Dean of the Faculty of Pharmacy, Dr. Mohamed Essam Hassan Agha, a group of administrative professors and a large number of students and guests.

The contest participants demonstrated their talents in singing, playing, poetry, acting and painting, and the audience enjoyed the recognition, interaction and encouragement of these distinguished talents.

After selecting the best talents of five categories, the public vote was requested to select the best talent of the five talents. The title was awarded to the student from the Faculty of Pharmacy, who was distinguished by his performance and his excellent singing voice.

After the announcement of the result, the Vice President of the University, Dr. Marwan Al-Hajji presented a medal of honor to the first-ranked student in addition to a donation to a charity of his choice. The winner of the title, Manhal Al-Sahwa, chose to present the award to the Basma Society to support children with cancer.

The university presidency also honored the members of the jury during the ceremony and gave them certificates of appreciation for their contribution to the success of this competition.

The family of the Syrian Private University congratulates the winner and wishes all its students permanent success in their talents as well as their scientific achievement.