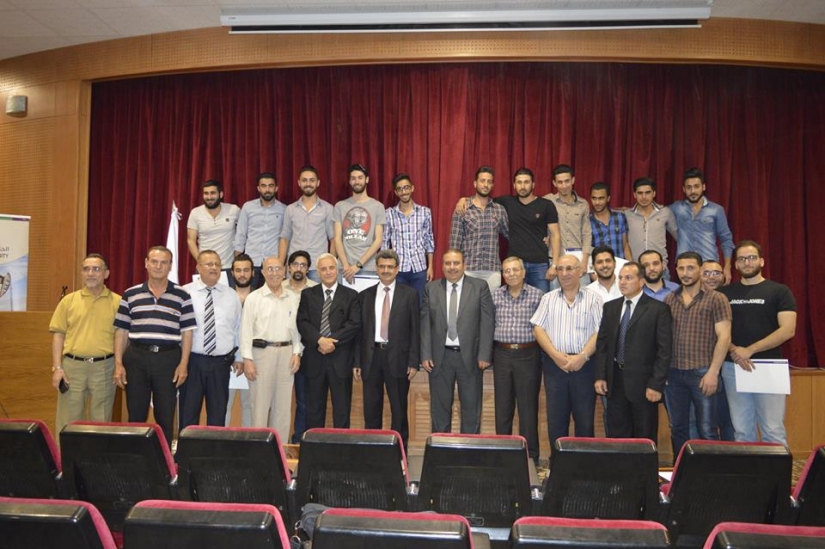 The Faculty of Petroleum Engineering held a special meeting to honor the outstanding students in the first semester of the academic year 2015-2016, in the presence of the President of the University, Prof. Dr. Abdel Razzaq Sheikh Issa, his deputy Dr. Marwan El-Hajji, his Vice-Dean for Scientific Affairs Dr. Mohamed Riad El Ghazzi, A group of professors and college students.

The meeting was opened by a speech from the Dean of the College, Dr. Amer Ghubra, during which he welcomed the President of the University, his deputies, the professors and the audience and praised the efforts of the outstanding students who received the first rank and wished them and their colleagues all the success and excellence.

This was followed by a speech of encouragement and encouragement from the President of the University. During his speech, he expressed his support to all students who would contribute to the improvement of the educational and administrative process both in the Faculty of Petroleum Engineering and in any faculty in the Syrian Private University. "We commend the efforts of the students and their excellence in their scientific achievements, which combine with the efforts of professors and staff at the university to achieve one of its most important objectives in providing the nation with distinguished cadres scientifically and practically able to serve our beloved country and contribute to its development and prosperity.

The meeting included certificates of appreciation for outstanding students and the taking of commemorative photographs with their colleagues and professors.

The Syrian Private University families congratulate the outstanding students at the College of Petroleum Engineering and in all faculties and wish them and all of their students more success and excellence.