Syrian Private University is a diamond sponsor for the university exhibition 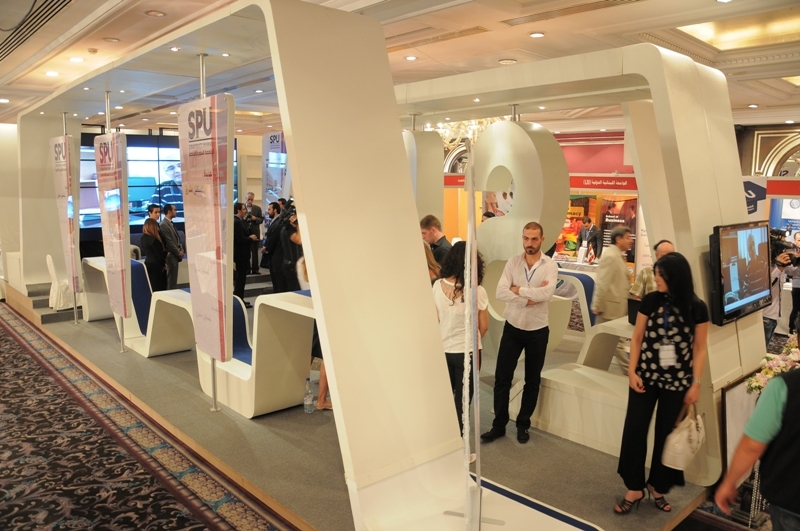 In conjunction with its new scientific and student development, the Syrian Private University participated in the "Universities and their Requirements" exhibition in its thirteenth edition, which was held under the patronage of the Minister of Higher Education. Mohammed Maala, organized by Al Haytham Exhibitions and Conferences.

The Syrian Private University participated as a sponsor of this year's edition of the University Exhibition held in Damascus on 16-17 July at the Damarouz Hotel in Damascus, with a prominent pavilion covering 72m from the exhibition grounds. Scientific, technical and educational facilities and new scientific, all this was the presence of a team of the university around the clock during the days of the exhibition.
The Faculty of Business Administration starts with its new vision through its new specialties for the next academic year 2012-2013, the College of Pharmacy with new construction and new laboratories equipped with the most important scientific devices and tools, the Faculty of Dentistry, the Faculty of Medicine, the modern and distinguished teaching hospital, the Faculty of Petroleum Engineering, Computer and Informatics.
The Syrian Special University recognizes the importance of this stage to dedicate the state of science, success and excellence based on its social responsibility and its role in serving the society as a leading educational institution in the country, and as a result of its sponsorship and participation of the exhibition, it is certain that direct communication is one of the most important means of defining and promoting the service. .
The aim of this exhibition is to achieve a direct encounter between students aspiring to the ranks of science and with their families on the one hand and between the Syrian and Arab universities to learn about the colleges, programs and specialties offered by these universities, which attract Syrian students to register in it, whether public universities or private universities.
The exhibition focused on the importance of students choosing independent competencies. It allowed direct interaction between participating educational institutions and students, exchange of information and a real definition of future options for university or graduate studies.