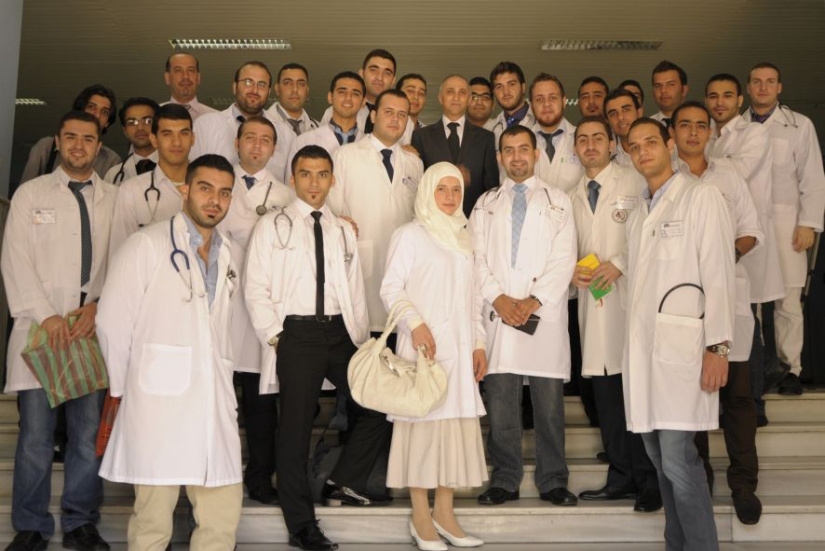 The session was launched at 9:00 am on 29 June 2013 at Damascus Hospital with an opening speech by the Dean of the Faculty of Human Medicine, Dr. Nazir Ibrahim, in the presence of the President of the University, Prof. Dr. Mohammad Maher Al-Mujtahad, Vice-President for Scientific Affairs, Dr. Adel Nofal and Dr. Adib Mahmoud, The Damascus Hospital and the participation of a group of medical professors at the Syrian Private University and the University of Damascus, where he spoke about the importance of the establishment of such courses was first thanks to students who expressed a lack of some degree in clinical skills, prompting the Deanship of the College to play a role And to think about organizing this training course to the highest international standards. He also thanked all staff members who contributed effectively to the preparation and organization of this course, whether from the University or the General Authority of Damascus Hospital, and The Dean of the Faculty of Medicine explained that, regarding the clinical training of human medicine students, which has been in the past 26 months and certainly not easy months in the history of Syria, the difficulties in some aspects of clinical training can be understood, thus adding a moral burden to the Deanship for effort. The Dean praised the responsiveness of the University Council and the President of the University in person as well as the Board of Trustees in providing all the necessary financial support for the success of the course, which corresponds to the vision of the Deanship of the College, which emphasizes the need for private universities to provide value Added to university education in Syria. The initiative of the Deanship of the Faculty of Medicine at the Syrian Private University to organize this course is the first initiative of this level in public and private higher education in Syria and is an actual translation of that vision.

The Dean then explained the content of the course from the premise that the Deanship believes that the most effective way to judge the clinical skills of the student is by evaluating his actual performance on real patients and in the real world of his work as a doctor and he is supervised by his professors and this is exactly the content of the course. He pointed out that the session combines the OSCE and the CIVA so that each student will be evaluated performance and guidance of eleven professors during the first two days of the session and in his review of the figures indicated the number of students participating 50 students and the number of patients forty-seven and the number of professors and supervisors is 48, For almost one of the highest proportions that can be made in any similar course in the finest international centers.

He expressed his confidence that the students will prove their worth in the clinical tests and the surgical and internal interviews in the national exam. The President of the University, Prof. Dr. Mohammad Maher Al-Mujtahad expressed his gratitude and appreciation for the attendance and participation of a group of the most important doctors at Damascus University and the private universities for the training course. Is one of the most important training sessions that should be held periodically, which contributes to strengthening the clinical skills of students in order to prepare strong medical cadres contribute to building the future of Syria. The President of the University also considered that this course is a step towards the best but A must be followed by other important steps in this area.

The course started with clinical tests and interviews where students were organized in 4 groups.

As for the remaining days, it was devoted to lectures and to the resolution of previous questions.

On the last day, the course was assessed by students through a special questionnaire. Students expressed the great value of this course in enhancing clinical skills and gaining the necessary expertise for the success of their careers. More importantly, they made some observations and suggestions for the development of similar future courses.