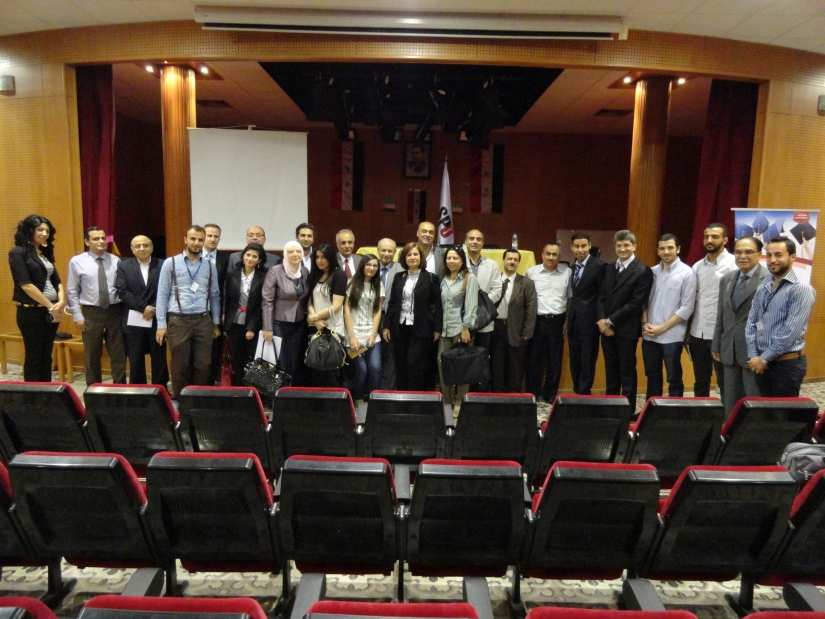 Faculty of Dentistry at the Syrian University called for a workshop entitled: Curriculum in the faculties of dentistry - the language of teaching and the years of study, which was held on Saturday 26 April 2014 on the runway of the Martyr Bassel al-Assad Institute.

The workshop was opened by the President of the Syrian University, Prof. Dr. Abdul Razzaq Sheikh Issa, stressing the importance of teaching in Arabic, while raising the level of students in English language. In order to provide good teaching in Arabic, Dr. Abdel Razzaq called for attention to the translation of foreign scientific books.

The discussion was moderated by Prof. Dr. Adel Nofal, Vice President for Academic Affairs and Dean of the Faculty of Pharmacy, who emphasized the need to teach in the mother tongue with interest in foreign language.

The interventions of the attendees focused on three topics:

1 - Notes on the curricula of the faculties of dentistry in Syria.

2 - The importance of teaching in Arabic.

3 - Number of years of study and the need for a year of excellence.

The recommendations of this workshop can be summarized as follows:

- Language of instruction: The majority of the audience emphasized the importance of teaching in the mother tongue Arabic language with the need to pay attention to English language of the age. Some supported teaching in English only in private universities.

- English language course: Most of the interventions confirmed the weakness of the English course in dental colleges. Therefore, there is an urgent need to develop the curricula and methods of teaching English language in the faculties of dentistry.

- Years of study: The idea of ​​extending the years of study to six years was accepted weakly by the attendees, while the majority stressed the need to improve the use of the five years.

- Year of excellence: The idea of ​​the year of excellence was widely contested by a supporter of the idea because of its usefulness in strengthening the clinical experience of the graduate and its opponents for two reasons: the first because it is suitable for countries with limited clinical practice, while in our country and with the availability of a large number of patients our students have good clinical training sing For the year of excellence, and the second because the current practical application of the concession year is less useful than spending time rather than practical benefit. Proposals were made to merge the year of excellence with rural service or science service.

This meeting was useful and helps those involved in the teaching of dentistry and practice of the dental profession to exchange ideas and convergence, and we offer the invitation to repeat such meetings in different universities:

- To discuss the problems of the dental profession

- To acquaint colleagues with each other, there are new faces constantly need to know about themselves and everyone to know them.