A course in endodontics at the Faculty of Dentistry 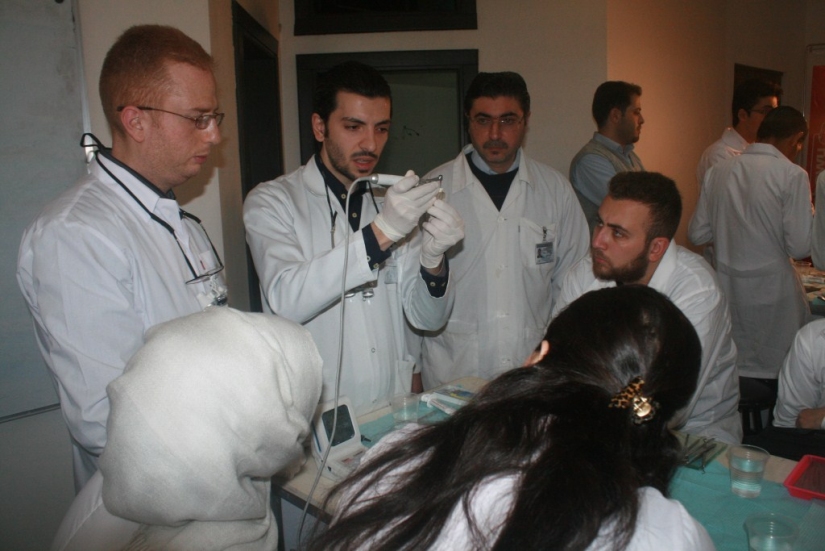 The theoretical aspect was held at the Institute of Martyr Bassel Al Assad on Saturday 6/12/2014 in the presence of a large number of professors and students of the faculties of dentistry, where the total number of attendance capacity of the gradient, about 400 students and doctors.

On the day of theoretical lectures, 8 valuable lectures were given:

The first lecture entitled "The medicine of the past and present" between the past and the present, delivered by Prof. Dr. Faisal Diop, the Syrian Private University.

Then, a lecture entitled "Automated preparation of root canal" was delivered by Prof. Hisham Afif, Head of the Department of Dental Surgery, University of Damascus.

Then I gave a lecture entitled "Washing and perfusion in the context of core therapy" by Prof. Dr. Mohamed Tayan - University of Damascus.

And a lecture entitled (Thermal fillings of root canal).

Then d. Fadi Al-Hussein - Member of the Technical Department of the Department of Dental Therapeutics at the Syrian Private University Lecture entitled (Applications of biological materials in therapeutics).

After completing the lectures, a competition was held for the students, which included a series of multiple-choice questions from the content of the lectures. The aim was to involve the top five students in this competition in the course of the course. 108 students of the fifth year from different universities are offered to the competition, with the exception of Syrian university students who are already participating in the course.

As for the practical aspect

Supervised the practical side of the course, a group of supervising doctors in the department of dental dentistry at the Faculty of Dentistry at the Syrian Private University under the chairmanship of Prof. Dr. Talal Nahlawi. Fadi al-Hussein, d. Heba Abdel-Al, Dr. Talaat Abu Hatab, d. Ghaith Al-Abrash, d. Zaher Al Taqi.

A group of employees of Nashawi Brothers, agents of the T-One file system, provided all supplies of files, thermal preparation equipment, thermocouples and an electronic sensor to read radiographs.

At the end of the course, certificates of appreciation signed by the President of the University were presented to all lecturers, trainers and sponsoring companies.

This course has the main objective of enabling our College students in the fifth year and before graduation to deal with the latest core processing techniques in the field of automatic preparation, thermal fillings and root hole fillings. A large part of the content of this course is due to graduate students' curriculum.

Thank you to all those who contributed to the success of this course, especially the President of the University, Public Relations, the Masters of the lecturers, the trainers and the sponsoring companies, and the special thanks to the President of the course Dr. Talal Al Nahlawi is the author of its idea and its organizer and the coordinator of its work with the sponsoring companies