A humanitarian campaign entitled From the warmth of our hearts 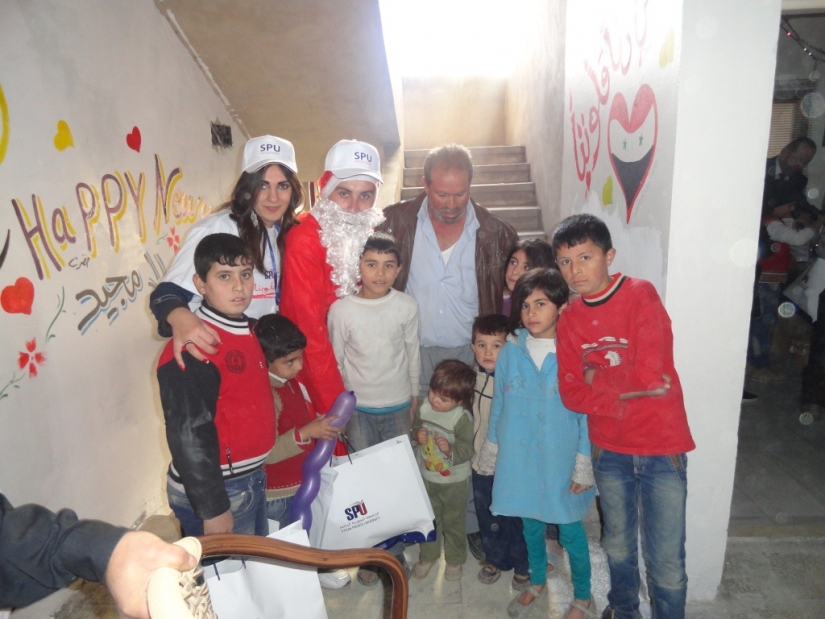 Based on its firm belief in the importance of its constructive role in society and the embodiment of one of its most important objectives, namely, linking the university with society, the Syrian Private University in cooperation with the National Union of Syrian Students - the Syrian Private University branch announced the beginning of December 2014 to launch a campaign for winter clothes for the displaced and Syrians Shelter centers under the title "From our hearts"

The aim of the campaign is to secure a winter dress for the Syrians who have been forced to leave their homes by the current crisis in Syria and are exposed to harsh winter climatic conditions, especially children and the elderly.

The Syrian University's special family of students, professors and staff participated in this campaign with the great support of the university presidency for this humanitarian and national charity campaign.

The campaign volunteers began to collect donations through large baskets placed on campus. The volunteers sorted out the clothes on a daily basis and chose the appropriate ones and sent them to the cleaning shop in preparation for delivery to the beneficiaries.

After that, the coordination with the Syrian youth imprint association and communication through them with the people targeted in the campaign "from the hearts of our hearts" and set a date for their visit on 24/12/2015 in conjunction with Christmas and the atmosphere of joy and joy where some students wear the costume Santa Claus And Mickey and Arnop to bring joy and warmth to the hearts of innocent children who stole the hands of evil Basmtham was the campaign volunteers from the students of the Syrian Private University the important role in redrawing the smile on the lips of these children and distributed gifts to express the warmth of their hearts and also distributed winter clothes for each of them They need to protect them from the cold winter.

One of the important initiatives undertaken by the volunteers of the campaign "Our hearts" is to visit the homes of the martyrs' families and to bring joy to the hearts of their children and their families as an expression of their gratitude and appreciation, like the rest of the Syrians for their sacrifices in preserving our dear homeland.

The volunteers expressed their happiness to participate in the name of the Syrian Private University in this humanitarian campaign, which painted the smile on the lips of the tears filled their eyes.

This campaign is one of a series of campaigns organized by the Syrian Private University to support the community and deepen its ties with it.