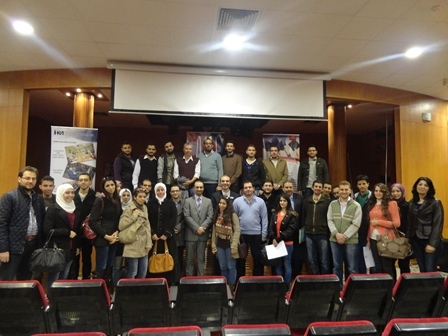 Continuing the series of skills of the labor market organized by the Syrian Private University in cooperation with the Human Resources Management Association for students of all public and private universities not only for its students and thus enhancing its role as an important scientific and educational platform in the community. Special session on Thursday 12/3/2015

At the beginning of the first workshop in the second series, certificates of attendance were distributed to all students who attended the first series. The certificates were delivered by the President of the University. AbdulRazaq Sheikh Issa and the President of the Society Dr. Munir Abbas, then Mr. Khalil Ruslan, a member of the Assembly workshop entitled "Business Protocol"

Where the workshop included several topics focused on the ethics and behavior of the work and listened to the questions of students and answered all their questions on the subject.

The family of the Syrian Private University thanks Mr. Khalil Raslan and wishes him continued success and further progress