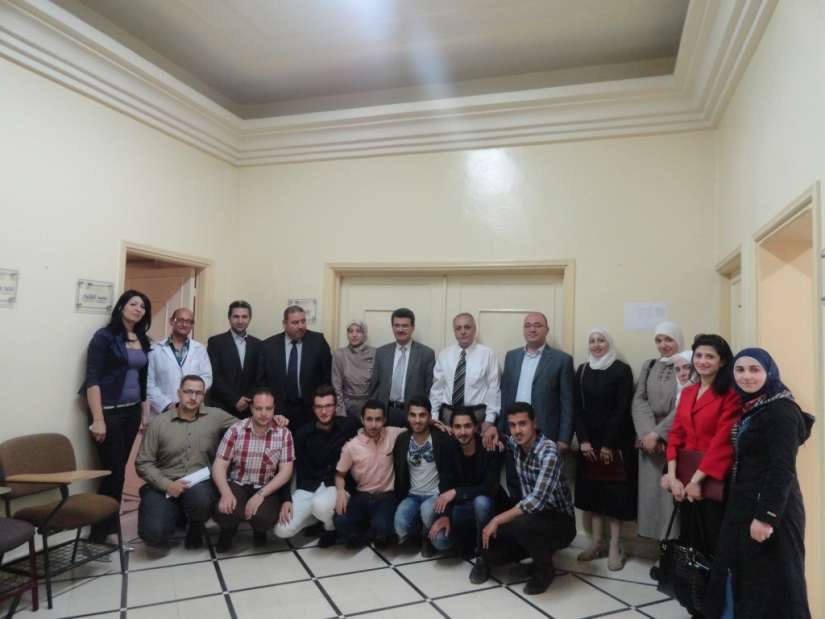 Under the guidance of the Presidency of the University, a meeting was held to collect the Deanship of the Faculty of Dentistry with the professors and students participating in the eighth scientific research competition which was held in cooperation between the Syrian Private University and the University of Damascus on 29/04/2015.

The meeting was attended by the President of the University, Prof. Dr. Abdul Razzaq Sheikh Issa and his deputy, Dr. Marwan Al-Hajji, Dean of the College, Dr. Osama Ibrahim, professors and some students.

The beginning was a speech to the dean of the college, in which he thanked the university president for his support and encouragement and congratulated the professors and students participating in the competition for the wonderful results they achieved. The professors then gave a brief summary of each research and talked about its importance in dentistry.

Dr. Abdul Razzaq Sheikh Issa thanked the Dean of the College, its professors and students for their valuable efforts in preparing, organizing and supporting this competition. He also congratulated them on the excellent results achieved by obtaining the first and second positions and encouraged efforts to maintain this excellence and achieve more successes. To become a leading dental college locally and regionally.

He also congratulated the vice president of the university, in turn, the Deanship of the College, its professors and students, and praised their efforts and wished them more success.

The family of the Syrian Private University wishes the Faculty of Dentistry represented by its Dean, Dr. Osama Ibrahim, the success of success and other important scientific successes