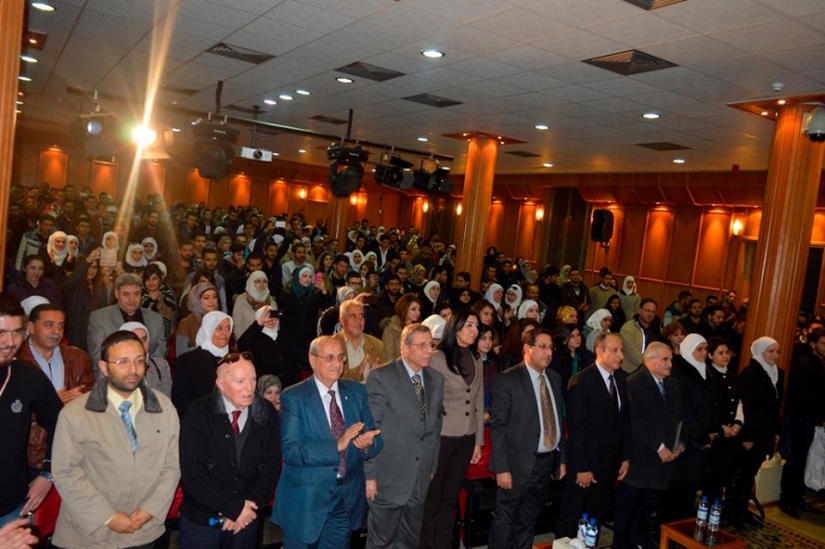 The Faculty of Pharmacy, in cooperation with the Administrative Authority of the National Union of Syrian Students and the Directorate of Public Relations and Marketing, held the annual meeting of the College of Pharmacy on Monday 7/12/2015 at the temporary university headquarters of the Martyr Bassel Al Assad Institute.

The meeting was attended by Syrian Pharmacist Dr. Mahmoud El Hassan, the President of the Syrian Private University, Prof. Dr. Abdel Razzaq Sheikh Issa, his deputy for scientific affairs, Dr. Mohamed Riad El Ghazzi, the Dean of the Faculty, Dr. Mohamed Essam Hassan Agha, and a group of professors and a large number of students.

The meeting began with a welcome speech from the Dean of the College, in which he thanked Dr. Mahmoud Al Hassan for accepting the hosting of the College in his annual meeting and presenting a lecture about the rules and conditions of membership of the union and other matters of interest to the students.

Dr. Al-Hassan's lecture was a tribute to the first students who excelled in the second semester of the academic year 2014-2015, where the professor spoke to the students and excelled their colleagues for the greatness and the time and effort to achieve excellence in their academic achievement, wishing all students success and success.

To conclude the meeting with a student play by preparing and presenting students in the Faculty of Pharmacy and supervision of the administrative body of the branch of the National Union of Syrian students in the college.

The Syrian Private University is grateful to Dr. Mahmoud El Hassan, the President of the Syrian Pharmacists Syndicate, for accepting the invitation to attend the annual meeting of the College of Pharmacy, and to give him a valuable lecture.