Design and the Mechanism of controlling a robotic arm

A Robot is a virtually intelligent agent capable of carrying out tasks robotically with the help of some supervision. Practically, a robot is basically an electro-mechanical machine that is gui 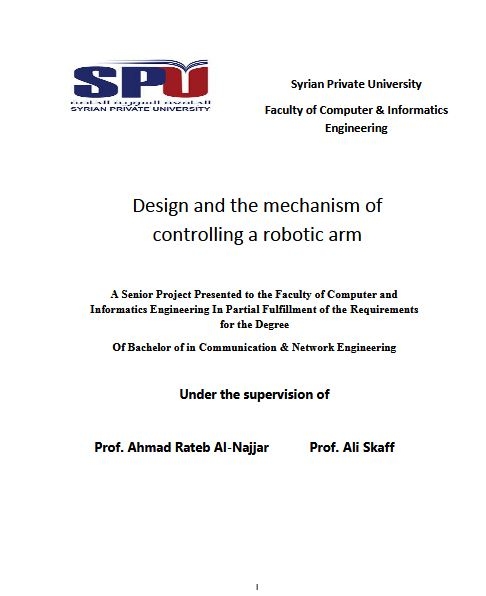 CHAPTER 1: INTRODUCTION
A Robot is a virtually intelligent agent capable of carrying out tasks robotically with the help of some supervision. Practically, a robot is basically an electro-mechanical machine that is guided by means of computer and electronic programming. Robots can be classified as autonomous, semiautonomous and remotely controlled. Robots are widely used for variety of tasks such as service stations, cleaning drains, and in tasks that are considered too dangerous to be performed by humans. A robotic arm is a robotic manipulator, usually programmable, with similar functions to a human arm.
This Robotic arm is programmable in nature and it can be manipulated. The robotic arm is also sometimes referred to as anthropomorphic as it is very similar to that of a human hand. Humans today do all the tasks involved in the manufacturing industry by themselves. However, a Robotic arm can be used for various tasks such as welding, drilling, spraying and many more. A self-sufficient robotic arm is fabricated by using components like micro-controllers and motors. This increases their speed of operation and reduces the complexity. It also brings about an increase in productivity which makes it easy to shift to hazardous materials. The main part of the design is ATMEGA-328p micro-controller which coordinates and controls the product’s action. This specific micro controller is used in various types of embedded applications. Robotics involves elements of mechanical and electrical engineering, as well as control theory, computing and now artificial intelligence. According to the Robot Institute of America, ―A robot is a reprogrammable, multifunctional manipulator designed to move materials, parts, tools or specialized devices through variable programmed motions for the performance of a variety of tasks.

Design and the Mechanism of controlling a robotic arm