Honoring outstanding students in the Faculty of Medicine 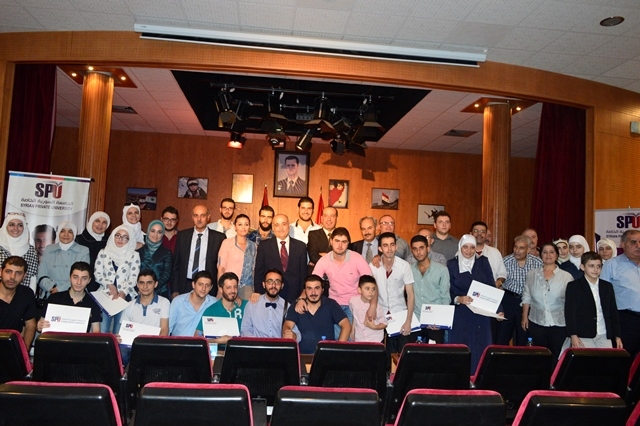 Faculty of Human Medicine held a ceremony to honor the first students in the first and second semester of the academic year 2016-2016 on Wednesday 27/7/2016 at the university's temporary headquarters.

The ceremony was attended by the president of the university, Prof. Dr. Mohamed Riad El-Ghazi, his deputy for administrative affairs, Dr. Marwan El-Hajji, the Dean of the Faculty of  Medicine, Dr. Nizar Ibrahim, a group of professors and students of the college.

The ceremony began with words of appreciation and encouragement from the Dean of the faculty and the President of the University, during which he expressed the efforts of distinguished people and their perseverance to reach these distinguished results which they pride themselves on with their parents as proud of their university.

The ceremony included the honoring of Dr. Ahmed Deeb Deshash for his valuable efforts during the academic years in the Faculty of Medicine and honoring the doctors who prepared a scientific research under the title "Endometriosis causing complete closure of the rectum and the Seine". Graduated from the Syrian Private University Dr. Shawqi Arafat, Dr. Faisal Al-Mousa and Dr. Mohammed Bilal Al-Sabek. The certificates were also handed to the students who participated in the CPR course and the certificates of appreciation for the first students of the first semester and the second semester of 2015-2016.

Honoring outstanding students in the Faculty of Medicine