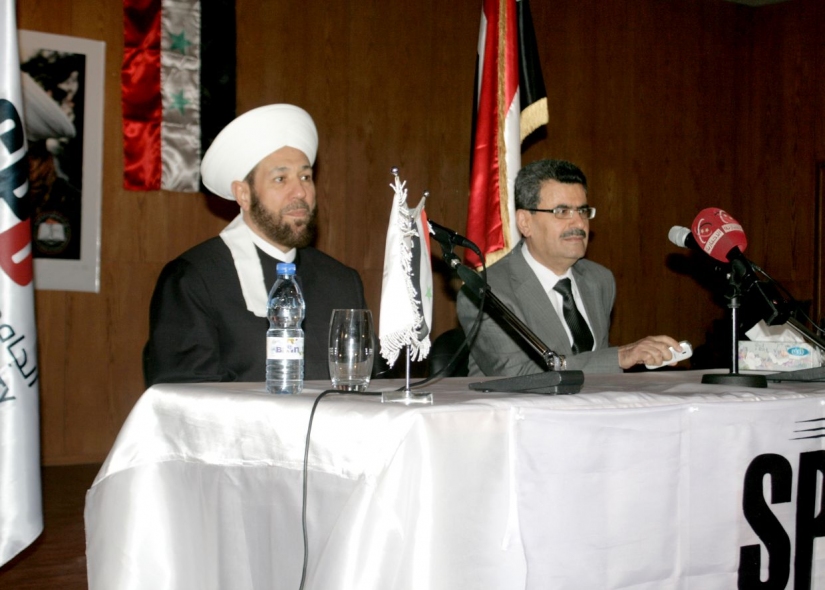 Syrian Private University in cooperation with the National Union of Syrian Students hosted the branch of the Syrian Private University, His Eminence the Grand Mufti of the Syrian Arab Republic, Dr. Ahmad Badr al-Din Hassoun, as part of the activities and events of the University.
The seminar was opened with a minute of silence for the martyrs of the martyrs, followed by the Syrian Arab anthem and then the speech of the National Union of Syrian Students, in which they emphasized the standing of the Syrian students behind the wise leadership of Dr. Bashar al-Assad.
The seminar was followed by a welcoming speech by Prof. Abd Al-Razzaq Sheikh Issa welcomed the guests of the university from the heads of universities and students and welcomed the guest of the Great University, His Eminence the Mufti, who began his lecture to greet the students first because they are the hope and they are the future of Sibnoun Syria modern. The Mufti affirmed through his lecture the importance of this promising generation, like all Syrians, adhere to the national principles and national unity away from sectarianism, which is the weapon of Syria's enemies to disperse the sons of the one nation with the aim of weakening it and facilitating its control. However, this has not happened since we have a generation consciously aware of what Waged against its homeland of conspiracies and will seek all the awareness of its frustration to keep Syria a pure and holy land
In his lecture, the Mufti addressed several important topics that focused on the important national role of all Syrians in preserving their homeland and building and rebuilding it through concerted efforts and walking together in the process of building and reconstruction under the leadership of President Bashar Hafez Al Assad
At the end of the lecture, photographs were taken of the Grand Mufti's memorial with the students of the Syrian Private University and the students of the other private universities participating in the seminar