Welcome meeting with new students at the Faculty of Dentistry 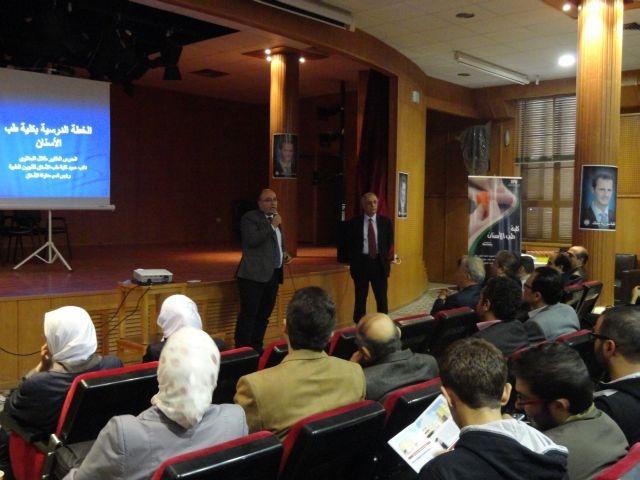 The Dean of the Faculty of Dentistry has invited its new students for the academic year 2014-2015 to attend a welcoming meeting in the presence of the President of the University, Dr. Abdul Razzaq Sheikh Issa and his deputy for administrative affairs, Dr. Marwan Al-Hajji.

He welcomed the new students to join the family of the Syrian Private University and invited them to take their role as children in this wonderful family through their commitment to attend their lectures. And to continue to pursue their education to be able to obtain a doctorate in dentistry within four years and not five, if they were able to benefit from the flexibility of the system of credit hours and achieved high grades in their exams, to graduate and be ambassadors of real distinguished C I am tired of them in the future.

Dr. Abdul Razzaq expressed his pride in being a member of the Syrian Private University in its great name, which brings together all Syrians.

The President's speech was followed by a speech by Dr. Marwan Al-Hajji, who also welcomed the new students and congratulated them for choosing the Syrian Private University as a bridge to a distinguished future. He also encouraged the students to attend theoretical and practical lessons and to communicate with the Deanship of the College and the university presidency permanently to overcome any obstacles. May obstruct the progress of their scientific achievement.

The students were then introduced to their professors and department heads. Dr. Talal Nahlawi gave a simple explanation about the college's study plan, and "Dr.

The conclusion of this meeting with a speech by the Student Union included the introduction of new students to the National Union of Syrian Students. And provided a meaningful representative paragraph added to this meeting a special touch of art ..