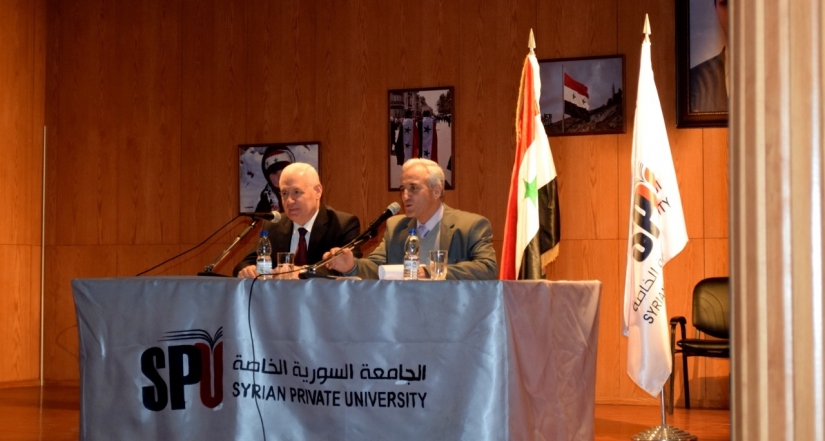 Under the patronage of the Minister of Higher Education, Dr. Mohammed Amer Al-Mardini, the Petroleum Engineering College at the Syrian Private University hosted the Minister of Petroleum and Mineral Resources Eng. Sulaiman Al-Abbas, where he delivered a lecture on "Oil and Gas in Syria between Present and Future Prospects" Al-Razzak Sheikh Issa and his deputies and assistants and deans of the faculties and members of the educational and administrative staff and students at the University and at the temporary headquarters of the University on Saturday, 21/25/2015.

The beginning was the speech of the Dean of the Faculty of Petroleum Engineering, Prof. Dr. Amergbrah, where he welcomed the Minister and thanked him for accepting the hosting. The minister discussed the oil and gas exploration and development in Syria and the infrastructure of the oil and gas sector in addition to the reality of the oil sector in the current crisis conditions and strategic production plan and additional sources of oil and gas.
The minister pointed out that oil and gas is considered the most important source of energy in the world and constitutes the raw material for most chemical industries, and the discovery and investment is the direct cause of human renaissance and the emergence of modern civilization, hence the product is the most important pillars of the economic entity of the producing countries.
He pointed out that the oil sector was subjected to systematic targeting as the most important pillars of the national economy. He pointed out that the rate of production of crude oil before the crisis reached 386 thousand barrels / bum. As the crisis began and under the influence of the Western embargo, 10 thousand barrels per day.
He pointed out that the technical cadres working in the oil sector were also subjected to deliberate targeting by the armed terrorist groups, which was the exposure of incidents of kidnapping, killing and displacement, which led to the death of dozens of working cadres and the migration of technical cadres trained from the work sites, especially from the eastern regions to areas More secure as well as to outside diameter.
He added that the theft of crude oil through the opening of wells in random ways, and sometimes from the collection tanks or transport lines, which led to serious damage to the layers produced and pollution of the environment and this will be a future one of the main challenges to resume production processes due to the large volume of pollution and high Costs of removing these effects.
He stressed that the preparation of plans for emergency, medium and long-term aims to rehabilitate what was sabotaged, and return production gradually to normal rates according to the strategic plan based on the following grounds:
- Follow-up exploration and development and investment of oil fields operating.
- To increase the yield from the discovered reserves through the application of subsidized production methods.
- Development of fields with low productivity and poor reservoir specifications, which contain heavy oil high viscosity and need special techniques for production

He talked about the sources of securing energy demand in Syria, such as local mining such as prospecting, land and sea exploration, non-traditional production such as production from the Chilean layers, oil logging, asphalt and regional cooperation projects, stressing that Syria's unique geographic location makes it an internationally vital route for transporting gas between Asia and Europe , Specifically from the Middle East, which owns more than 40% of the world's proven natural gas reserves, to Western European countries that import 85% of their gas needs, referring to the most important international cooperation projects.
- Gas pipeline project Iran - Iraq - Syria - EU countries can 110 million cubic meters per day
- The project of transporting oil and gas from Iraq through Syria to the Syrian export ports
- The Arab gas pipeline project extends from El Arish in Egypt to Aqaba in Jordan and from Aqaba to the Rehab area near the Syrian-Jordanian border. It extends north to the Syrian-Turkish border, where most of it was implemented.

The minister stressed that the oil sector in Syria is still promising and able to meet the challenges in meeting the country's need for oil, natural gas and oil derivatives, and that the ministry has great hopes in accomplishing the strategic plans and meeting the ambitions in promoting this vital sector, the National .
At the end of the lecture, a dialogue was opened with the attendees, who praised the lecture and its valuable information and touched on a number of topics related to the future visions of the oil and gas sector, exploration and marine exploration, and went to the students of the College of Petroleum Engineering and encouraged them to follow the march of science and do more to become in the near future Qualified people who are scientifically and practically qualified to contribute to building the future of our dear country

The family of the Syrian Private University thanks Mr. Suleiman Al Abbas for his valuable lecture and wishes him continued success and further tender.