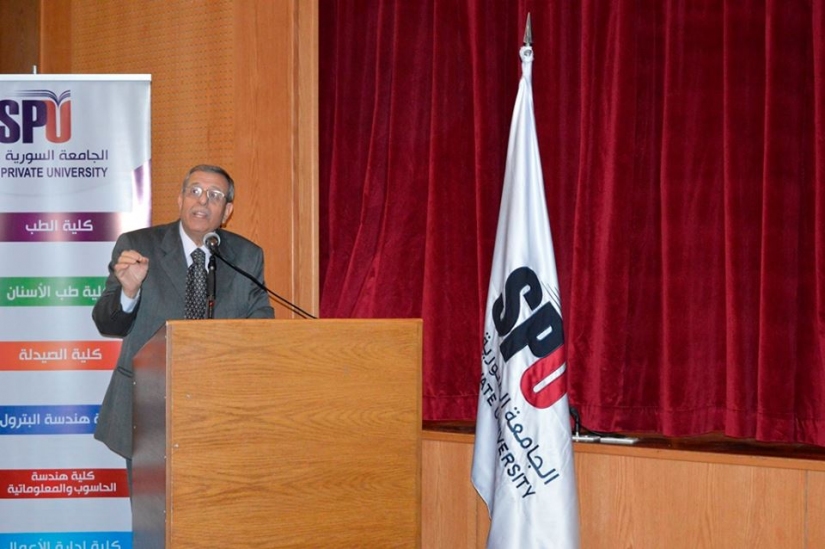 On the occasion of the Arabic Language Day, the Syrian Private University held a cultural evening on Sunday, 20/3/2016, at the temporary university headquarters - Institute of Martyr Bassel Al Assad. The evening was attended by Prof. Dr. Abdul Razzaq Sheikh Issa, President of the University and his deputies, deans of the colleges and their deputies, and a group of professors, students and guests. The Syrian Private University was also honored to attend Dr. Mahmoud Al Sayed, Dr. Mahdi Al-Ash and all attendees. Scientific introduction to the Arabic language and a summary of the evening. This was followed by an explanation by Dr. Mahdi Al-Ash about the importance of Arabic language and the need to pay attention to it, especially in the educational process and gave some examples of his experiences in this field. After that, a group of students presented a play about the role and importance of Arabic. After that, Dr. Faisal Diop presented a selection of masterpieces of the Arabic language and then the thought of a play entitled "You are" presented by a group of students of the Syrian Private University. The evening ended with an interesting dialogue debate between Adam and Eve, during which they used the vocabulary of the depth and richness of the Arabic language, which also emerged in a poetry poem entitled "The Voice of the Little Bulbul" presented by Prof. Dr. Riad Al-Ghazi. The Syrian Private University families thank all who participated in this evening of its professors, students and staff and wish them all the best of luck and further tender.