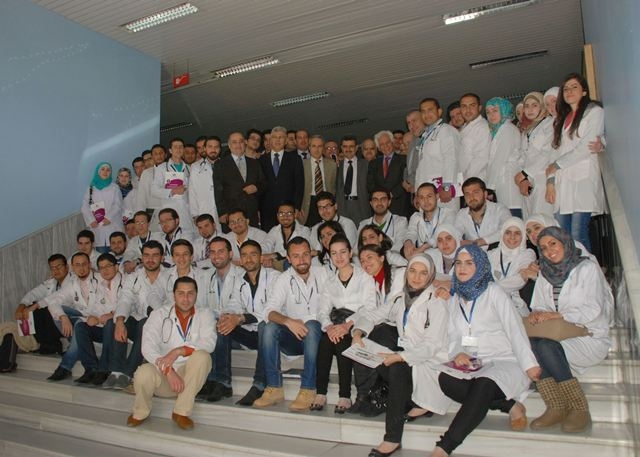 The first session was with an opening speech by the Dean of the Faculty of Medicine in which he welcomed all the attendees and summarized the importance of this course in enhancing the skills of clinical training for students. This is the second course held by the college in order to prepare the students for the national exam indicating that this course is held to the highest standards to ensure the highest level of training for students. In order to ensure the high level of the graduate and ensure the exercise of his profession with great mastery in the future.

Followed by a speech by the President of the University, in which he welcomed the Assistant Minister of Higher Education for Private Universities Affairs and the Director of the General Authority of Damascus Hospital and all the professors and students participating in this training course which focuses on providing medical students with the necessary scientific skills which comes in parallel with the theoretical aspects of the university To excel and perform his profession with high efficiency in various medical centers in which he will work.

This was followed by honoring the Director of Damascus Hospital by the President of the University and the Dean of the Faculty of Medicine for his efforts and interest in the students of the university as well as some hospital doctors supervising the clinical training. Shields and certificates of appreciation were presented and thanked for their efforts in raising clinical training. Giving in their high message

The opening ceremony was a collective memorial to all the students with the professors, the assistant of the Minister of Higher Education, the President of the University, the Dean of Medicine and the director of the Syrian Private University Hospital. The course will then begin for a full month. At the end of the month, students are subject to an exam program, To pass it with confidence after gaining all the clinical skills through this training