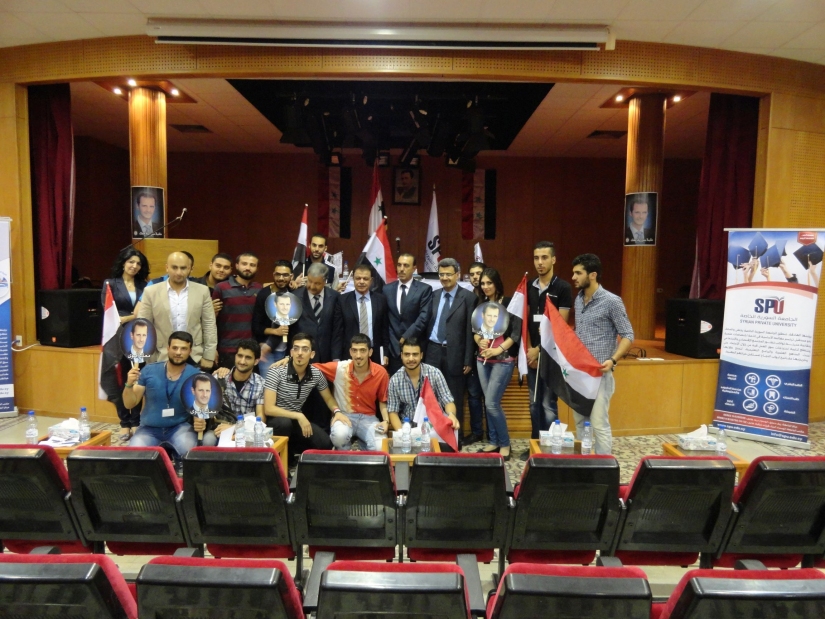 Syrian Private University organized a political symposium presented by Dr. Ali Shuaibi in the presence of some heads of private universities and their deputies, the President of the Syrian Private University, his deputies, his assistants, deans of the faculties and a large number of members of the educational and administrative staff at the university and representatives of the National Union of Syrian Students, And the number of students.

The lecture was opened with a minute of silence for the souls of our martyrs, followed by the Syrian Arab anthem and then the speech of the National Union of Syrian Students.

Dr. Wael Imam welcomed the university guest and gave a brief introduction to the lecture entitled "No compulsion in religion." He mentioned the basic pillars on which Syria based its political pluralism, freedom of belief and religion, protection of cultural diversity and ending with the Syrian Arab army.

Dr. Shuaib's lecture entitled "Flashes in the History of Terrorism" gave a brief overview of the types of terrorism and its historical beginnings, beginning with the pharaohs of BC, then terrorism in the Prophetic Age, and ending with the modern terrorism that Syria is currently experiencing and the pressures exerted on it. And commitment to patriotism after the sectarian differences exceeded because it is the way to maintain the cohesion of Syria under the leadership of the President, who was able to destroy all the conspiracies that have passed through Syria.

At the end of the valuable lecture that was presented, a token gift was presented as a token of thanks and appreciation from the Syrian Special University of Dr. Ali Al Shuaibi for his honorable national views.