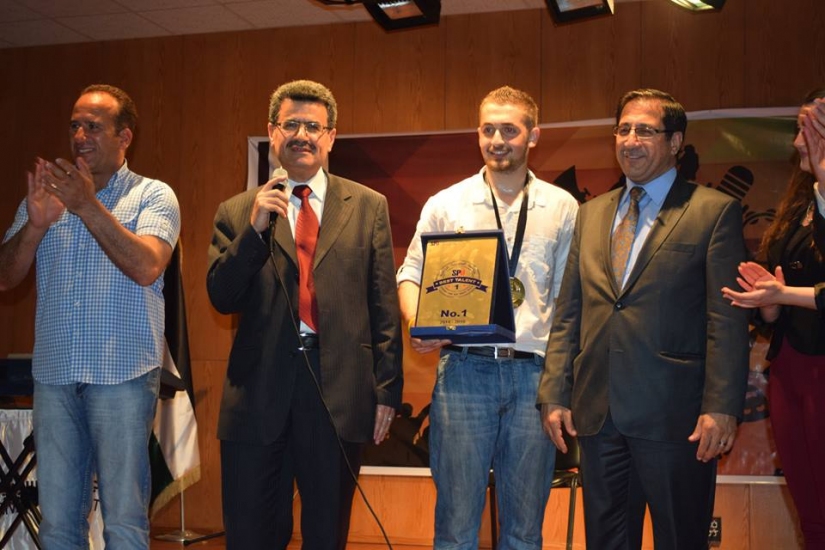 In the presence of Dr. President of the University and its deputies and deans of the faculties and a group of faculty and administrative and guests of the University and a large number of our students .. The final stage of the SPU Best Talent, which was organized by the University in cooperation with the university branch of the National Union of Syrian Students, The beginning of the second chapter where several performance tests were performed for the talents of the participants in (acting, singing, drawing, poetry) and reaching the final stage.

After presenting the contestants for their talents and evaluating the judging panel composed of Mr. Hossam Kilani (theatrical director), Dr. Bahgat Akroush (doctor and poet) and Ms. Carol Nouna from Assas (School of Music), five contestants were selected at the level of participating talents. The President of the University and his Vice-President received medals bearing the slogan of the competition and then the voice of the audience on the best talent among the five participants who won the title of SPU Best Talent for the year 2014/2015.

After that, Zaid was awarded the shield of the competition by Prof. Dr. Abdul Razzaq Sheikh Issa, who praised the talents of the students and encouraged them to continue to pay attention to their talents along with science and culture and promised that the Syrian Private University will continue to support its students in all respects, The organizers of this great competition from the students of the National Union and the Directorate of Public Relations and Marketing and expressed the importance of the establishment of such activities to identify the talents of students and their energies and support.

In addition, a donation was made to the Basma Charitable Society in order to achieve one of the university's goals. It is to connect the university with the community as an integral part and the media coverage was covered.

The Syrian Private University congratulates student Zeid Kalho for winning this competition and wishes him and all the talented students who participated in the competition or did not participate in the success of their scientific achievement as well as their talents and other activities.