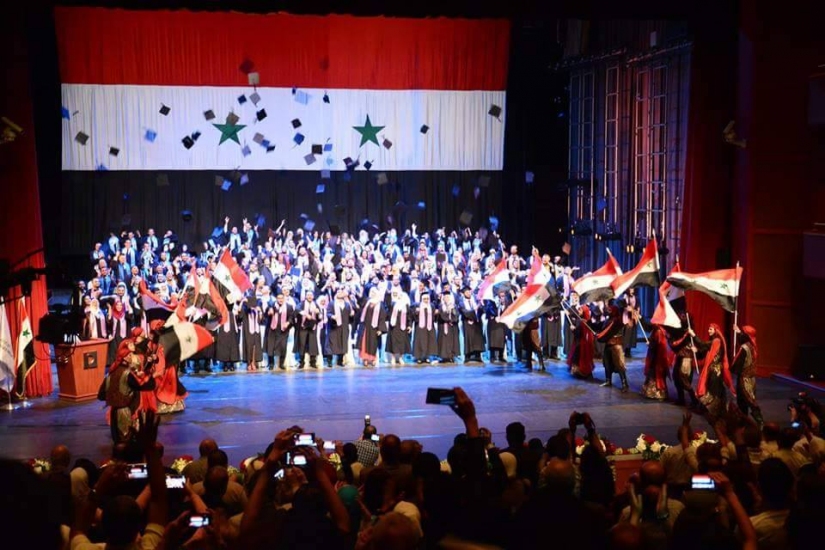 With the great joy of the hearts of graduates and their families and educational staff and administrative, celebrated the family of the Syrian Private University - University of values ​​- the graduation of the seventh package of students for the academic year 2014-2015, which coincided with the tenth anniversary of its founding.

The ceremony was held at the Opera House in Damascus in the presence of the Assistant Minister of Higher Education, Dr. Boutros Miyaleh, representing the patron of the ceremony, the Minister of Higher Education, Dr. Mohammad Amer Al-Mardini, and the colleague Darine Sulaiman, member of the Executive Office of the National Union of Syrian Students.

In a speech during the ceremony, Assistant Minister Dr. Boutros Miyaleh said: "I wish a promising future for graduates by acquiring the knowledge and practical experience that will translate into success in the practice of their profession. The graduation is a cornerstone to be built on to meet the challenges and harness their expertise in the service of the homeland and humanity, The Ministry of Higher Education commends the birth of a new batch of new qualified cadres to build the homeland.

In turn, the university president, Prof. Dr. Abdul Razzaq Sheikh Issa, stressed that what we are witnessing today is the result of collective efforts made by the students and their families and the educational and administrative staff at the Syrian Private University to bleed our beloved country young and young capable and able to take responsibility in building their homeland With their knowledge, awareness and affiliation. In his speech, Dr. Abdul Razzaq Sheikh Issa addressed the graduating students and recommended that they adhere to the ethics of the profession and its moral and scientific systems, which should be an active factor in the building of their homeland. He also instructed them to be ambassadors of their country, university and professors wherever they are in the fields of science and the work.

We are committed to keeping soldiers loyal to our homeland ... With our knowledge, we preserve and build its monuments ... With these words, colleague Wassim Gharazuddin, head of the branch of the National Union of Syrian Students at the Syrian Private University where he stressed that the education process continues despite all odds and stressed that the National Union of Students Syria will always communicate with the students and open the doors to receive any problems facing them and work to deal with those involved in the spirit of cooperation and responsibility to remain united in the face of difficulties towards a promising future for Syria beloved.

The graduation ceremony was given by Raghad Al-Halabi, who is ranked first in the Faculty of Dentistry, where she expressed her thanks and appreciation to the university and their teachers and their dependents for what they have reached today, to be young, faithful and faithful working to build their society and cohesion and able to withstand the All the difficulties, sincere youth of the message of science complement the march hand in hand to build the bright future of Syria.

The number of students graduating from the ceremony is 250 students from the faculties of medicine, dentistry, pharmacy, computer and computer engineering, petroleum engineering, business administration.

The ceremony included many paragraphs of paintings and national patriotism expressing the sincerity of the affiliation of graduates of the Syrian Special University - Al Qayyim University - to their homeland after they gave the oath to the audience to be loyal loyal to their country, which gave them a lot to build with their brains and their forearms and keep them united and united and contribute to building their future.